Few lawmakers from the Scheduled Castes (SC) and Scheduled Tribes (ST) in the Lok Sabha are appointed to the various committees that discuss and analyse proposed laws, scrutinise expenditure and policies, and generally hold the government of the day accountable, our analysis of parliamentary data shows.

Reservation for the SC and ST communities in the Lok Sabha has existed for seven decades. We find that SC/ST members’ proportional share in the Lok Sabha is not reflected in their presence in various committees, implying that SC/ST parliamentarians have limited influence and authority inside the country’s highest legislative body.

In India’s first general election in 1951-52, one-fifth (20.04% of 489 seats) were reserved for SC (72) and ST (26) communities. Seven decades on, it is vital to examine if reservation–now at 24.13% or 131 of 543 Lok Sabha seats–has affected SC/ST lawmakers’ influence in parliament; whether they have the opportunity to raise issues within parliament; whether they have access to important decision-making positions as committee chairpersons; whether they are members of diverse parliamentary committees, and so on.

All committees must provide equal representation for SC/ST MPs, said Maansi Verma, founder of Maadhyam, an organisation that reports on legislative matters. “Lack of representation across committees can ghettoise SC/ST MPs in two ways,” she told IndiaSpend. “One, by ensuring that they continue to represent reserved seats only. Second, they can only raise a narrow set of issues as members of limited standing committees.”

Parliament has 24 departmentally-related standing committees (DRSCs)–panels that deal with corresponding ministries. For instance, the committee on agriculture will deal with matters pertaining to the agriculture ministry. Of the 24 DRSCs, 16 are handled by the Lok Sabha secretariat and eight by the Rajya Sabha.

Besides the 24 DRSCs, there are three financial committees–estimates, public accounts and public undertakings–that scrutinise public finances. These are distinct from the finance committee, which scrutinises the expenditure of the ministry of finance.

Committees have a term of one year. Members are usually re-nominated to the same committee to leverage their knowledge and experience on the subject matter, said Verma.

Of the 543 members elected to the 17th Lok Sabha, 138–or 25.4%–belong to SC/ST communities; this is one percentage point higher than the proportion of seats (24.13%) reserved for SC/ST members in the lower house.

The 25.4% SC/ST membership in the 17th Lok Sabha has not translated into a proportional increase in the SC/ST parliamentarians’ presence in all 24 standing committees and three financial committees, IndiaSpend’s analysis of parliamentary committee membership has found.

In the defence committee, their membership adds up to 21.4%. The finance committee has consistently had 9.5% SC/ST MP membership in the last three Lok Sabhas.

SC/ST MPs’ membership to three of these ‘big 4’ committees is higher under the 17th Lok Sabha compared to the 15th and 16th Lok Sabhas, the data show.

It is almost never the case that an MP has membership of more than one standing committee, a Lok Sabha secretariat official told IndiaSpend on condition of anonymity. If a majority of the SC/ST parliamentarians are assigned to the social justice committee, then these MPs will not get the opportunity to weigh in on subjects other than those pertaining to social justice, the official said.

Further, a handful of SC/ST MPs have been named chairpersons of standing committees in the last decade, our analysis reveals. SC/ST MPs can be considered for chairperson positions–appointed by the Lok Sabha speaker–for 16 committees, as per rule 331D of the Rules of Procedure and Conduct of Business in Lok Sabha.

One SC/ST MP–former tribal affairs minister, Jual Oram–serves as the chairperson of the defence committee among all the 16 standing committees since the 17th Lok Sabha was constituted, the data show. SC/ST parliamentarians constituted 7.3% (21 of 240) of Lok Sabha DRSC chairpersons and financial committee chairpersons from 2009 to 2020, we found.

The chairperson sets the agenda and direction of that committee. They have the power to cast the deciding vote, correct errors in reports and expunge unparliamentary words or phrases, among other things.

A lack of legislative experience can lead to SC/ST MPs being passed over not only for committee chairperson positions, but also from being included in the Union cabinet as ministers. Only six of 54 ministers i.e. 11% ministers in the present National Democratic Alliance-II government–are SC/ST MPs.

Being the head of the party is important as it comes with membership of the business advisory committee (BAC), which includes all party leaders and the Speaker, which sets parliament’s agenda and timetable. 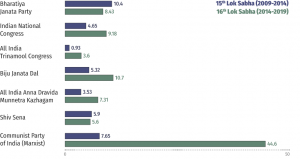 SC/ST MPs participated in debates to raise matters of national importance as well as pressing issues from their constituencies. Arjun Ram Meghwal, an SC/ST MP from Bikaner was the parliamentarian with the highest participation in Lok Sabha debates during the 15th Lok Sabha (2009-14), according to PRS. Four of the top five MPs–the others being Shailendra Kumar (Kaushambi), P.L. Punia (Barabanki) and Virendra Kumar (Tikamgarh)–to participate in debates in the same period were from reserved constituencies.

In the 16th Lok Sabha (2014-2019), two of the top 10 MPs to participate in debates were members of SC/ST communities, according to PRS data. This information is unavailable for the 17th Lok Sabha because its term is still under way.

Asking questions on the floor of the house is another tool in an MP’s toolkit to wield influence and hold the government accountable. Two of the top 10 and seven of the top 30 MPs to ask the most questions in parliament in the 15th Lok Sabha (2009-14) were from SC/ST communities, according to PRS data; the MP to raise the most number of questions on the floor of the house–Kirit Solanki from Ahmedabad West–too was a representative of a reserved constituency. In the 16th Lok Sabha, four of the top 30 MPs to pose the maximum number of questions belonged to SC/ST communities. This information for the 17th Lok Sabha is currently unavailable as its term is ongoing.

Speaking in parliament is not the same as speaking out. SC/ST MPs are quiet owing to the tenth schedule, better known as the anti-defection law, which expressly forbids MPs from either voting against their political party’s stance or by “voluntarily giving up their membership” of the party.

“Almost all members of parliament from reserved constituencies are expected to keep quiet inside the Parliament,” a former parliamentarian told IndiaSpend on condition of anonymity. “Their [SC/ST MPs’] opportunity to highlight injustices against their community comes either during [already] highlighted cases such as Hathras or during the Zero Hour, which depends upon a lottery system. Internal dissenters have invited political isolation.”

SC/ST parliamentarians’ activities–speaking up, participating in debates or raising questions–did not have a bearing on the opportunity they received from their political parties to contest again from the same constituency. For instance, the BJP did not give tickets to 53.7% of all their SC/ST MPs to contest in the 2019 general election, as per IndiaSpend’s analysis of publicly available data from the Election Commission. For the 2014 general election, the BJP had denied tickets to 28% of all their SC/ST MPs, and the Congress to 26% of their sitting SC/ST MPs.

This poor opportunity to contest again can be an impediment to their prospects and long-term contribution as elected representatives, said Verma of Maadhyam.