The parliamentary standing committee on finance has asked the Centre to address the issue of dwindling goods and services tax (GST) collections, which the finance ministry blamed for delay in the compensation to the states. It has also asked the government to prevent misuse of input tax credit (ITC) and take measures for increasing GST compliance.

The Centre has paid Rs 45,745 crore as compensation to states for their revenue loss under GST for the first four months of the current financial year, showed the data given by the committee.

Compensation is paid by the Centre to states once in two months. So, it paid Rs 17,789 crore to states in May for the first two months and Rs 27,956 crore in July for June and July, according to these figures.

States have been complaining that they have not got compensation after these four months. The state representatives had met finance minister Nirmala Sitharaman last week over the issue. At a recent event, Sitharaman had said cess component of GST was not adequate to compensate states. “State finance ministers met me. Their concerns are genuine.

We will honour our commitment.” She had said distortions crept in the GST structure as the rates were cut and input tax credit got smaller.

The committee asked the government to resolve all the troubling issues at the earliest to register the revenue buoyancy.

The committee asked the revenue department to remain vigilant to prevent misuse of provisions such as ITC and enhance monitoring of overall compliance. Systemic reports and feedback surveys should be collected from taxpayers to evaluate whether GST is operating smoothly. 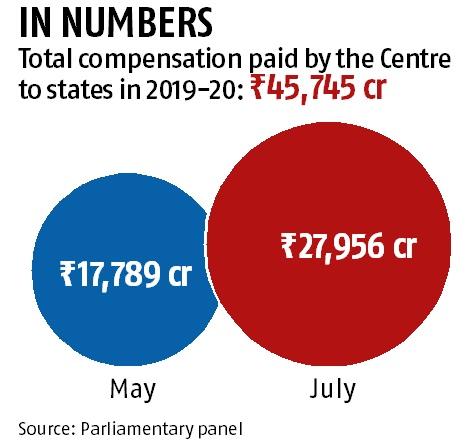 The panel wanted the government to come out with the new Direct Taxes Code (DTC) to broaden tax base. The task force, headed by former member of the Central Board of Direct Taxes, has submitted its report to the finance minister, but its contents have not been made public. It is learnt to have recommended an increase in the threshold limit from the current level of Rs 2.5 lakh a year and overhauling the tax slabs.The panel said the number of taxpayers for the assessment year 2018-19 was 84.5 million, of which 80.4 million are individual taxpayers. “Assuming India’s population to be 1.3 billion, the percentage of taxpayers in India works out to be just 6.2 per cent.”

The panel said the revenue department had made a large amount of tax refunds along with the accruing interest on refunds. The amount of refund stood at Rs 1.51 trillion and interest paid was Rs 17,603 crore in respect of direct taxes for 2017-18, while the corresponding figures for FY19 stood at Rs 1.61 trillion and Rs 20,566 crore, respectively.

The panel suggested that the processes are revisited so as to dispense with the need for raising unrealistic demands as also payment of disproportionately large advance tax by assesses. In this context, the committee reiterated its earlier recommendation that the interest component involved in tax refunds be reflected in the Budget itself so that it passes through parliamentary scrutiny and also has a deterrent effect.

The committee expressed concern that the revenue department is a significant contributor to litigation in terms of number of appeals filed before the tribunals and courts, albeit with a low success rate.

Since efficacy is a critical aspect of any modern tax management regime, the committee opined that systemic changes in tax administration needs to be effected to address the lacunae in the dispute resolution mechanism. For this purpose, the monetary limit of ‘tax effect’ for filing of cases by the income tax department should be revised significantly upwards in different appellate fora, High Courts, and the Supreme Court to minimise litigation.

This news can also be viewed at: https://www.business-standard.com/