The Indian delegation at the just-concluded Hong Kong World Trade Organisation Ministerial conference was better prepared than in the previous rounds, parliamentarians, cutting across political parties, said on Wednesday.

The fact that the conference did not break down was “a success in itself,” they said at a meeting held here under the banner of the Parliamentarians Forum on Economic Policy Issues.

The former Maharashtra Governor and independent member of the Rajya Sabha, P. C. Alexander, said duty and quota-free market access to the least developed countries was cause for concern in India.

India’s policy of opening up the economy on its own and without any pressure from other countries may weaken its negotiating position at the WTO, former External Affairs Minister Yashwant Sinha has said.

“India through its liberalization is moving forward. Our average tariffs came down to 20 per cent. However, it is feared that this autonomous liberalization will weaken our negotiating position in the WTO,” he said, at a discussion under the banner of the Parliamentarians Forum on Economic Policy Issues (PARFORE).

Other MPs who took part in the discussions of PARFORE, constituted at the initiative of cuts international, were of the opinion that there has been a major change in the negotiating skills of India and other developing countries in comparison to the Uruguay round of GATT.

“As the negotiations are getting complex we are increasingly improving our preparedness towards negotiations. Now, there is a greater interest both inside and outside the Parliament on trade related matters,” he said.

A “Parliamentarians’ Forum on Economic Policy Issues”, comprising 45 members of various parties, has been launched here.

Meant to be a bipartisan platform to address economic issues, it has been set up by CUTS International, a research, advocacy and networking group, working on policy issues.

The MPs, who were present at the launch, felt that India needed a stronger regulatory framework and that regulators should be made accountable to Parliament instead of to ministries. 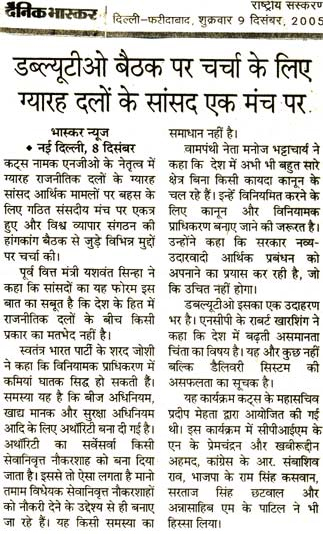 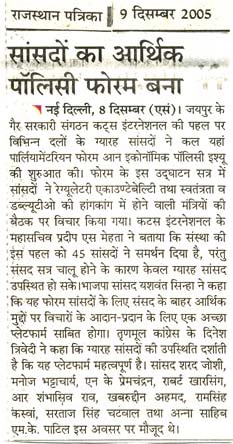 NEW DELHI, The ?Parliamentarians? Forum on Economic Policy Issues?, formed at the behest of five MPs cutting across party lines is gaining popularity with every passing day with more and more MPs expressing their willingness to join the forum. Already about 30 MPs from different kparties have agreed to join. The forum will be an informal and non-partisan platform to facilitate discussions among MPs on a periodic basis on core economic policy issues to accelerate consensus on both the content and process of reforms, it is being hosted by the Consumer Unity & Trust Society (CUTS), a non-profit making and a leading civil society organization.

??.at this point of time when economic reforms are sweeping our country and globalisation has become all pervading, having a Parliamentarians Forum on economic policy issues on non-partisan lines is most appropriate and would be appreciated by one and all irrespective of what political party one belongs?, obseree M.V. Rajasekharan, Minister of State for Planning, Government of India, in a letter to join the Forum.

??.a great idea to provide Parliamentarians the forum to discussthe core economic policy issues and to arrive at consensus cutting across party line particularly in the present day economic scenario where India is on the path of emerging as an economic giant in the world?. Observed Santosh Bagrodia, M.P.and Chairman, Parliamentary Standing Committee on industry.

Yashwant Sinha of the Bhartiya Janta Party, Suresh Prabhu of the Shiv Sena, N.N. Krishnadas of the Communist Party of India (Marxist), Madhusudan Mistry of the Congress, and Dinesh Trivedi of the Trinamool Congress are the initiators of this Forum.

?The forum aims to discuss divergent opinions on core economic policy issues reflected in and out of the Parliament and the media and impart necessary information to MPs so that debate inside could be more informed? said Pradeep S. Mehta, Secretary General, CUTS.

Economic Forum by the Parliamentarians 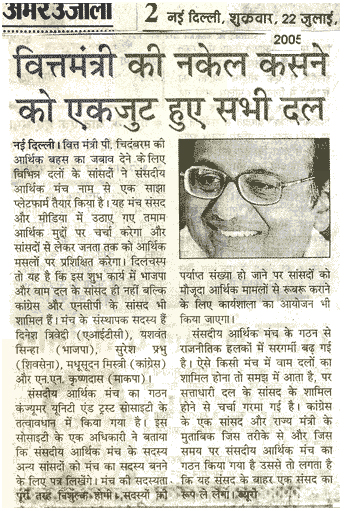 MPs get together to float economic forum

The MPs who would be part of the forum are former finance minister and BJP leader Yashwant Sinha, Suresh Prabhu (Shiv Sena), Madhusudan Mistry (Congress), Dinesh Trivedi (Trinamool Congress) and N N Krishnadas of CPM. The idea behind such a forum is to hold discussions on the divergent opinions on the core economic policy issues reflected in and out of Parliament and the media, the society said in a statement.

Five MPs have floated a parliamentary forum on economic issues. The non-profit organization, Consumer Unity and Trust Society (CUTS), is playing host to the initiative.

The MPs who have formed the forum are Yashwant Sinha of the Bhartiya Janta Party, Suresh Prabhu of the Shiv Sena, N. N. Krishnadas of the Communist Party of India (Marxist), Madhusudan Mistry of the Congress, and Dinesh Trivedi of the Trinamool Congress.

A CUTS spokesperson said letters will be sent to all MPs seeking their participation. The aim is to discuss divergent opinions on core economic policy issues reflected in and out of the Parliament and the media. ?Now when India has come up as one of the top ten gross domestic producers and is on the way to become a great economic giant, it is incumbent upon policy and law makers to think and guide both the establishment and the public about what is best in the national interest,? said CUTS.

The parliamentary forum is expected to be ?non-partisan and informal? where MPs cutting across party lines will be able to air their views on a periodical basis on basic economic issues in the field of trade, competition, regulatory reforms, investment and their cross linkages.