A group of 11 Members of Parliament (MPs) from a cross section of political parties formally launched the Parliamentarians? Forum on Economic Policy Issues (PARFORE) in a meeting hosted by Consumer Unity & Trust Society (CUTS) in New Delhi.

Pradeep S Mehta, Secretary General, CUTS welcomed all the participants and informed them that the Forum has received assents from 38 MPs, who wish to create a non-partisan forum to address the economic policy issues which can help India move forward. The PARFORE is set up as a result of a collective initiative taken up by five MPs representing different political parties. Since the very beginning, CUTS has been at the forefront of facilitating the entire process. 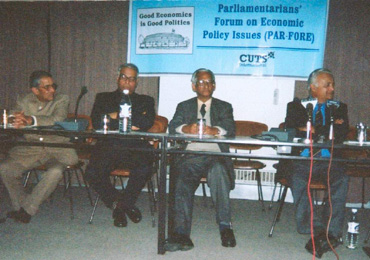 In this inaugural meeting, the PARFORE discussed two crucial issues: (i) Regulatory Autonomy and Accountability; and (ii) WTO Hong Kong Ministerial Conference: What is at Stake for India? For this, CUTS prepared and distributed ?Issue Notes? in advance on both with the objective of providing a brief to the Parliamentarians.

Regulatory Autonomy and Accountability, was discussed at length, and the participants felt the need for a closer attention to it. The MPs expressed concern on the need to address the gaps in the regulatory framework in India. Further, the practice of appointing retired bureaucrats in regulatory bodies was also debated, a trend which the MPs wanted to stop.

On the WTO Hong Kong Ministerial, MPs opined that all matters should be discussed in depth after the Ministerial.
The participants endorsed that the PARFORE offers a fit platform for MPs to share views and ideas on economic policy issues on an informal basis, which would help in inculcating better understanding, and subsequently, in reaching a consensus on contentious issues.

A suggestion was, therefore, made to CUTS to continue preparing detailed analysis on various bills, which are to be presented in the Parliament, and organise such meetings to discuss them. It was felt that such a discussion would help MPs in understanding the bills better and hence facilitate their effective participation in the debates.

Some of the MPs present were: Yashwant Sinha, Dinesh Trivedi, N K Premchandran (all of them are initiators of PARFORE); Sharad Joshi, K R Sambasiva Rao, Khabiruddin Ahmed, Ram Singh Kaswan, Sartaj Singh Chatwal, Robert Kharshing, Manoj Bhattacharya and Annasahib Patil. Many of the MPs, who endorsed the participation, could not turn up because of winter session of the Parliament.

?Addressing the gaps in the regulatory framework in India is badly required, and the papers produced by CUTS will help spur a good discourse?, said Sharad Joshi. ?My worry is that all new regulatory bills provide a regulatory authority, which are going to be manned by retired bureaucrats. It appears that the bills are being drafted to find jobs for civil servants after their superannuation, rather than addressing the core concerns of the law?, he added. Marxist MP, Manoj Bhattacharya, said: ?Increasingly, we are having more non-regulated sectors in India, while the imperative is to create and place sound regulators in the best interest of the people?. He felt that the government is inclined towards a neo-liberal approach to economic management, which was not desirable.

Participating in the discussion, Robert Kharshing expressed concern over the growing inequality in the country ? a failure of the delivery system of the government.

It was decided that CUTS would draw up calendar for the year 2006 and organise meetings of the PARFORE in New Delhi, on Wednesdays during the Parliamentary sessions.